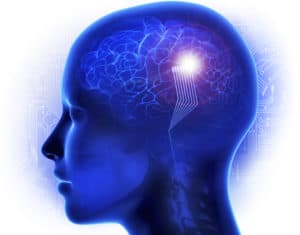 Every time the techno titans come out with a new super computer or study indicating that computers are gaining on human intelligence, the scientific community fires back with salvos of it own. So, according to the latest scientific findings by the Howard Hughes Medical Institute and several others, not only do we look better than PCs, but we’re walking around with a quadrillion-byte storage capacity network inside of our cranial-towers that have something on the order of 100 trillion synaptic connections to our neurons for incomprehensible processing power.1

Not surprising, we now have the technology for those suffering from traumatic brain injury to connect with technology and the world outside of their brains via brain-computer interfaces (BCI) that act as a sort of mind prosthetic to try and repair and improve damaged neurological and cognitive functions – like hearing, sight, and motor skills.

Technology of Connecting the Brain with Computer

No more than 20 years ago, scientists began BCI endeavors by tracking eye, head or hand movements that were connect to computers. All that was able to do was control the movement of a mouse pointer on the computer screen. Eventually, they collectively agreed those devices and efforts weren’t practical for what they were trying to do – hook up the mind to machines. Also, the custom hardware used to communicate between patient and computer was so expensive, it meant only those well-to-do enough could afford it.

At a 2015 Society for Neuroscience symposium, Stanford University physician and neuro-engineer Paul Nuyujukian talked about the need to an affordable solution that could be available in most clinics and hospitals. Born from this effort was the neural prostheses – an affordable technology that would enable a patient to use only their brain to communicate directly with computers. Like any great scientific project, the team stumbled, but then shifted from trying to develop their own interfaces to adapting existing technology in the form of making modifications to a Nexus 9 tablet and using Bluetooth for connectivity from the mind to machine.2

“Our goal is to unlock the full user interface common to general-purpose computers and mobile devices,” Nuyujukian told those attending the symposium. “This is a first step towards developing a fully-capable brain-controlled communication and computer interface for restoring function for people with paralysis.”4

BCI Applications and Hope for those Suffering TBI

BCI technology doesn’t only help those in recovery with TBI, but it helps others suffering some sort of brain injury or motor-coordination disability, like those with:

Perhaps the most well-known BCI success story is that of renowned physicist and cosmologist Dr. Stephen Hawking, whose BCI exploits are enabled by a technology that’s a bit dated by today’s standards. He uses his cheek muscles to move a mouse pointer to communicate and explore with a computer.

Perhaps a better sign of things to come is that of the story of London’s prodigal violinist Rosemary Johnson, who in her early 20s was involved in an auto accident that left her physically disabled and with a lifelong prognosis of TBI. Thanks to the noble efforts of Plymouth University and the Royal University for Neurodisability, Johnson was entered in a study that crowned her with an electroencephalogram (EEG) cap that harnesses electrodes that record her astounding brain activity to interact with computers.3 Johnson, with the use of the neural prostheses, is now able to interact with a computer screen to select notes, adjust volume, and the speed of musical pieces she plays in her mind that can then be performed live by the Paramusical Ensemble – a group of able bodied musicians that perform her creations.

Challenges Ahead for TBI Patients

Despite the advances science and technology has made with regard to marrying BCI and TBI, a vast number of patients may be so impaired and suffer so much from their condition that this type of interface may never be of any assistance to them. The effects of TBI to the individuals and their families can be daunting, and that’s where a personal injury case can help those who survive get the financial support they need to not only get life-sustaining treatment and therapy, but aid them in pursuing recovery efforts like those BCI offer.

If you have been injured and suffered traumatic brain injury, contact a Pasadena brain injury lawyer at the Law Offices of Pius Joseph – Personal Injury Attorney by calling (626) 397-1050 or by emailing us via the contact form on this page.