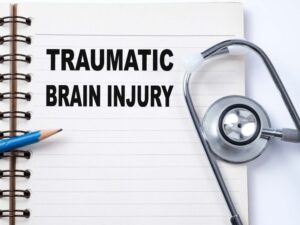 Traumatic brain injuries (TBIs) are among the most common and serious injuries people suffer in car accidents. A TBI can severely affect a victim’s memory, speech, motor functions, personality, and other critical bodily functions. While some people fully recover from TBIs, others are left with long-term disabilities.

If you or someone you love sustained a brain injury from a car accident in California, call or contact the Law Offices of Pius Joseph for a free consultation.

How Do Traumatic Brain Injuries Happen in Car Accidents?

There are many ways to suffer a traumatic brain injury in a traffic collision. The first is by something directly striking or penetrating the skull. In a car accident, loose objects can fly through the cabin and hit the vehicle’s occupants. These objects can break through the head and become lodged inside brain tissue in some cases.

Another way traumatic brain injuries happen in a car accident stems from the force of the impact itself. Even the smallest cars weigh nearly a ton ― enough to deliver a violent amount of force in a crash. A sudden, intense change in momentum can cause the brain to rattle inside the skull, leading to a TBI.

The third way traumatic brain injuries happen in crashes is when someone is ejected from the vehicle. If a driver or passenger isn’t wearing their seat belt, the collision may be enough to send them flying out of their seats and through the windshield. Drivers and passengers who are ejected in an accident may suffer brain injuries from the impacts of the windshield and the ground.

Some common types of brain injuries from car accidents include:

Some common symptoms of a TBI include:

Some signs of a TBI don’t emerge right away. If you begin experiencing any brain injury symptoms, seek medical attention immediately. A delayed-onset injury can still be fatal.

With the right evidence and help from an experienced car accident lawyer, you can potentially recover compensation for a wide range of damages in California, including:

A TBI can leave survivors with injuries that last a lifetime, impacting their ability to earn an income and participate in activities they once enjoyed. If you or someone you love sustained a TBI in a car accident, find out if you can pursue financial compensation for your losses. Call or contact the Law Offices of Pius Joseph today for a free case review.