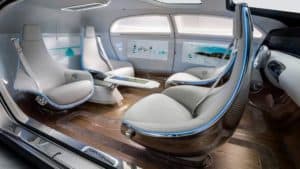 Automakers and regulators are both doing their best to make the roads safer by integrating technology that will take our hands and minds away from the steering wheel with technologies like accident avoidance systems, and believe it or not, but even self-driving cars. In fact, Ford Motor Company has filed a patent for an autonomous vehicle (AV) that will double as a mobile movie theater.1

Can you imagine jumping in your car to go to work and instead of worrying about your commute, you could turn on your in-car-movie-theater system, watch a retractable screen magically appear from a hidden overhead compartment, and watch the latest movie you got from Red Box? Me either, but it sounds like it’s in the works. Kind of makes you wonder about any unforeseen factors that could lead to a car accident doesn’t it? Won’t these AVs still need a responsible driver to take over in the rare off-chance something doesn’t go right? The answer is most emphatically – yes!

Google has also been involved with perfecting a self-driving vehicle that has already logged more than 1.3 million miles of road testing. But, the future of its AV had a bit of a setback on February 14, 2016 when one of them crashed making a lane change with a public transportation bus in Mountain View. Apparently, Google’s AV had to make a lane change to avoid a collision with a sand bag.

“In this case, we clearly bear some responsibility, because if our car hadn’t moved there wouldn’t have been a collision,” Google stated in its monthly report.2

In a report to the California Department of Motor Vehicle, Google disclosed its pilot program operators had to switch control from automatic pilot to human control an estimated 340 times between September 2014 and November 2015.3 The switch from automatic pilot to manual driving was due to several technology failures, including:

National Highway Traffic Safety Administration (NHTSA) administrator Mark Rosekind has been singing the praises of the advancements towards computerized driving systems that are being developed with accident avoidance technology, but at the same time he has urged caution saying that drivers may need to remain alert even as the AV system is in transit.

The California Department of Motor Vehicles put forward legislative language to state law makers that would look at keeping steering wheels, gas and brake pedals standard in all AVs. They also requested that a licensed driver be onboard to take over in the event of a computer glitch.4

As far as a legislative approach, Rosekind said that the NHTSA needs to “have some kind of national approach to this.”

If you have been hurt in an auto accident involving a self-driving car, contact a Pasadena auto accident lawyer at the Law Offices of Pius Joseph – Personal Injury Attorney by calling (626) 397-1050 or by emailing us via the contact form on this page.