The Difference Between a Truck Accident and a Car Accident in Pasadena, CA 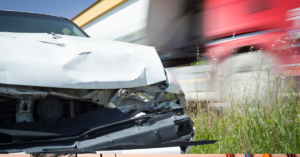 The first difference between a truck accident and a car accident is obvious — size. Trucks can weigh as much as 76,000 pounds more than the average automobile. There’s simply no way a car can withstand the force of being struck by a semi-truck without serious damage. And for the people inside the car, the injuries can be catastrophic.

Commercial truck collisions differ from car crashes in other ways as well. The trucking industry is strictly regulated, with many stakeholders who could be held liable for a crash. And because the damage is generally greater in truck accidents, the amount of compensation possible for injured victims is typically higher than for people hurt in car wrecks.

If you were injured in a Pasadena truck accident, you already know how complicated the aftermath can be. At The Law Offices of Pius Joseph, we can help you pursue compensation from every liable party so that you have the money you need to pay your bills and move forward in life.
Contact us today to learn more in a free consultation.

There are several important distinctions between truck and car accident cases in Pasadena:

According to truck accident statistics released by the California Highway Patrol (CHP):

Common types of truck accidents in Pasadena include:

Laws that Apply to Truck Accidents Only

The commercial trucking industry is subject to several laws and regulations that do not apply to personal drivers, including:

If you were hurt in a Pasadena truck accident, don’t try to recover compensation alone. Call or contact The Law Offices of Pius Joseph for a free case review today.